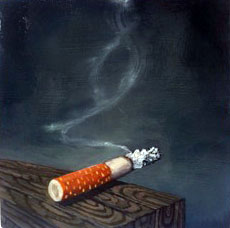 "The Seduction" 8"x8"
This series started as a guilty secret on the side.  I was officially painting a cityscape and I started sneaking cigarette paintings on these little 4”x4” panels that I had left over from Spring Open Studios at Art Explosion.  What got me started was this NPR news piece I heard on the radio in my Cousin Larry’s car when Tom (my wonderful boyfriend) was driving us all to a Polihua Beach on Lanai, through red dust and big red rocks.  It was an interview with the Prime Minister of Iceland.  She was saying that cigarettes were going to be illegal there and that you could only buy them if you had a doctor’s note and only at pharmacies.  They could only be smoked at home and only if the smoke didn’t bother the neighbors.  I thought this is it!  Cigarettes are truly becoming contraband.  I always felt like an outlaw when it came to smoking.  When I would see an officer of the law or my mother I would automatically feel nervous about the pack of Marlboro lights in my purse.  I loved smoking, but I am really glad I don’t smoke anymore.  I like painting cigarettes better than smoking them. 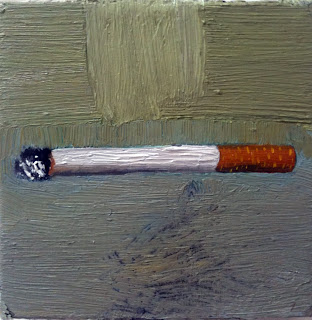 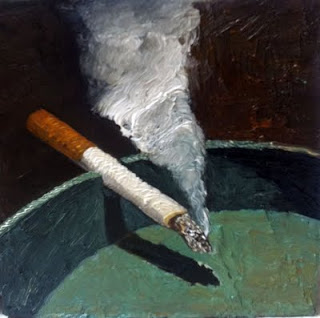 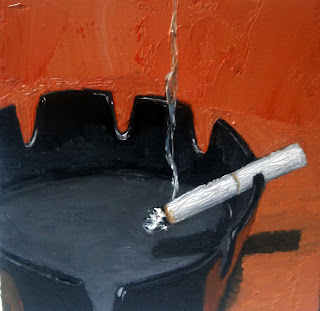 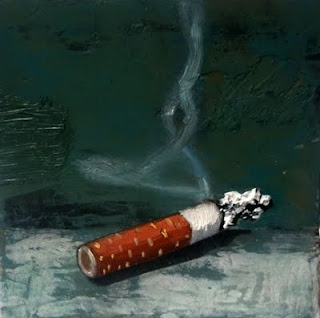