Art Explosion Spring Open Studios was a fun party that lasted all weekend.  It was nice to see so many friends, old and new.  Dana Nojima, one of my oldest friends, stopped by.  Our fathers met when they were 13 years old in Manzanar.  My dad, Mickey and Uncle George were life long friends and fishing fanatics.  Our two families together, must have visited every fishing hole on the West Coast, the favorites in California being the Salton Sea and Venice Fishing Club fishing derbies in Zuma Beach.
Thanks to everyone that stopped by.

New painting called "Dog Weather" that started as a collage, wandered a bit and ended up without a dog.   I'm still going to call it "Dog Weather".  Here I'm showing five different stages that the painting went  through, leading to the final version, Number 6.

If I am missing your last name please forgive me.  I'm a little brain dead right now.  Night all...
Posted by Lani Tanaka at 10:27 PM No comments:

Some Pictures From Last Night

Work In Progress...POLE, Landscape or Collage?

Both of my cameras retired in the same week.  I wasn't so happy with their performance, but I am cheap and therefore willing to limp along with something that works okay.  However, it is a amazing and lucrative... for Best Buy, how old digital things like cameras become obsolete when you get a new computer and your computer becomes obsolete when you get a new phone, and so on.. and so on, hence, early retirement.
So after pestering all the camera savvy people about what I needed to do, to improve the photographs of my paintings, I finally went to Calumet on Bryant Street and met Christy.  She is knowledgeable, patient and has a good sense of humor.  I bit the bullet and got the SLR, the tripod, the polarized lens (for glare),  the cable trigger thing, and a case for the whole shebang.  Even so well equipped and advised, I'm finding that, I can't get around it, it is a huge new medium that I am going to have to learn.

Come On Out And See The Art

It's That Time Again! 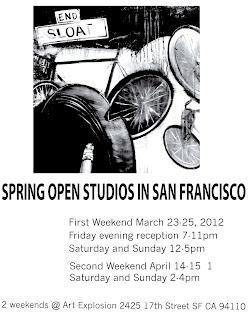 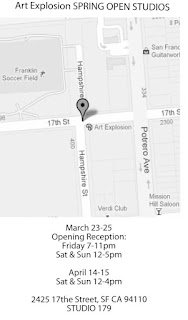 I love the beach. I grew up in an area called Mar Vista, just east of Venice Beach, California. My mom still lives across the street from Venice High School, where they offered surfing for P.E. and my friend Jenny was the only girl enrolled, smart girl.  Back then Hollywood filmed the movies "Grease" and "Rock and Roll High School" there and the front lawn was graced with the vandalized statue of the beautiful alumnus, Myrna Loy.

Now I live in San Francisco.  It took me a while to appreciate the beaches here. They are cold and the surf is wild and full of sharks. I have always felt landlocked here because of the freezing water temperatures that make you feel as if your feet will snap right off of your ankles.   For the first few years I lived in S.F. I made summer pilgrimages to L.A. to get my beach fix. I finally bought wetsuits for my daughter and myself and it changed my life! We can go into the ocean at anytime, winter or in the legendary Mark Twain summers. The suit really makes me feel like a superhero, impervious to cold, jellyfish and other watery things from the murky depths. If I had known it was going to be like this I would have done it decades ago.

Luckily there is one thing that Southern and Northern California beaches share, and that is the light just before dusk, my favorite time of day anywhere. So here is another painting with the 45th Avenue sign.  The composition started out based on a collage, but in the end I edited it down to just the essentials, the beach and the light.

Posted by Lani Tanaka at 2:42 PM No comments:

Derailleur and Thank You!

To start, I would like to thank everyone for their wonderful support a couple of weeks ago,  after my donut disappointment.  I actually had three rejections that week and the donut one was the least of them.  I know that painting is not for the faint of heart, though, I sometimes wish I had done better in math instead of art.  However,  as they say in pre-school, "you get what you get and you don't make a fuss."  (I don't mean to discount the absolute HIGH that one experiences while painting and it is not just from the fumes.)  Anyway, thanks again!
Moving right along, I could swear I took a bunch of photos of earlier versions of this painting, but all I could find were these three.  Oh well, it is the third painting in the series (A series that could use a name, by the way, in case anyone thinks of one.),  that includes, "Sloat", and "Orange Bike".  The first thing that makes this series exciting  is that it is headed in the direction that I desire, but could never quite envision or manifest, combining abstraction and realism.  These paintings are a huge departure for me.  I never know how they will end up... ever.  Ok, maybe I do in the last 30 minutes.  However,  it's not a process like "Side Swiped" where there is so much death and destruction.  It goes along steadily with a lot of editing, but no complete wipe outs.
Another thing that makes this series interesting to me, is that when the painting is finished it is still a mystery to me.  I think who the heck painted that?  And last, the paint resonates and even if the painting were chopped up, each section could work as a little independent painting!  At least that is what I think.  I know what you are thinking, "Wacko Paint Addict".

Other two paintings in the otherwise un-named series.